Not realise today is the 4th day of Metaldays time always fast runin away even im already 3 days at Metaldays but i dont see yet so much around here, there are many activited beside festival like tracking throught the Soca river or Rafting, tracking and there inside the festival every morning there had program like at 10 AM in morning yoga time , Dance lesson, beach sport, was suprice i hear before about that but since 3 days never have time get some relax or see around beach river, where every night are the party after show at beachar. if you already sitng there anjoy look around prety landscape around you you would’t move. but it was not lacky day for me the rain are starting falling down.
back to Stage ground there the fist band the first Death Metal band from Luxembourg Scarred. at the begining that was a Project Thrash metal band which bing out one album in 2004 after one they are change the lineup, since that they are evolved towards a heavier and more brutal sound. since 3 days was a suprice band are open band at metaldays tehy great band but only sad not so many audience on that time.
The Doom melodic metal, atmospheric black metal band from Ljubljana, Slovenia The Canyon Observer. even that was not kind music i listening to but they are great band awesome performace at the stage, which vocal style a bit with the addition of sludge metal style vocals being amongst the shrill scream that is the black metal bits. Symphonic Power Metal band from Austria Serenity. They have defined their gendre with more melodic and symphonic metal elements. as the begining they much progressive elements, in later works they’ve shifted gear a little towards a more symphonic and orchestral approach with definite resemblances to bands like Kamelot, Epica, Delain or Nightwish. but you might hear there still progressive element and powely which smoothest vocal deliveries in modern power metal, elegant melody,
Time for Death Metal, Immolation, Origin from New York, United States, even they are had some problem which the drum Steve Shalaty was lost view of his drum kid by transport with airplan and alos the Guiters player Bill Taylor he must go back in the US due to a family emergency. Even there only 3 of band memeber are playing on the stage but there has not lost much impect, they are full of energy and power and loudly which dirty sound of the guitar and that was in the early stage of the show, usualy in the main ground stage not much of the audience, today is differece to much crowded, chaos and more crezy. was great to see them after view year i was show them live performance. Atmospheric/Symphonic Death Metal from Athens, Attica, Greece Septicflesh. the was split up in 2003 because of personla issue but reunited in late 2007. they are unique in the way that they are probably one of the only Greek bands that have managed to be viewed as a genre-leader in an international level. which blast beats drummerthat closely resembles the Polish death metal sound in general. but with a twist that being spacious atmospheric orchestrations moving in tandem with the underlying brutality. Each element gives each other ample space to reveal itsel and clean vocals including some female backing vocals, was great set list included songs like Communion, Order of Dracul, Titan, The Vampire from Nazareth, Persepolis which breaks the moshpit and chaose down the stage.
Stoner/Doom Metal from Dorset UK Electric Wizard . which heay, low and slow perfectly elements the psychedelic periods of the 70’s.They’re an highly influential doom band with sludge and stoner traits, they’re more thick sounding than your average doom band and use large ammounts of distortion and the occasional flanger. sounds like classic Black Sabbath but far heavier and slowed down to a soul eviscerating pace with a penchant for drugs, Satan and Lovecraftian horror.
almost 10 pm in evening, the show was late from the schedul. after long cheak sound finaly the heavy metal band from Santa Barbara, California USA DevilDriver hit the stage.the music style not just like Heavy Metal but there view kind music genre are mix like Thrash metal, Death Metal, Hardcore, Melodic Metal and little abit Punk which great break down and groovy part. great live perfomace.
Time for the headliner of Metaldays on Thursday after half hour are prepareing the stuff finaly the legendary of Death Metal from Gothenburg, Sweden At the Gates. after 2 time breaking up, on 2010 it was the second reformed of them. at the begining was Death Metal band now turn in to Melodic Death Metal. but sound doesn’t difference. excellent reffing guitar every tight sound which aggression of the vocal Tomas Lindberg he was moving around the stage, constantly animating the fans and in close contact with the front row of audience.shocked faces and horns in the air throughout the venue, People were banging all over the place and the pit got violent, The fans eagerly followed and made that show one big party.incredible and magical performance on the fourth days of Metaldays. 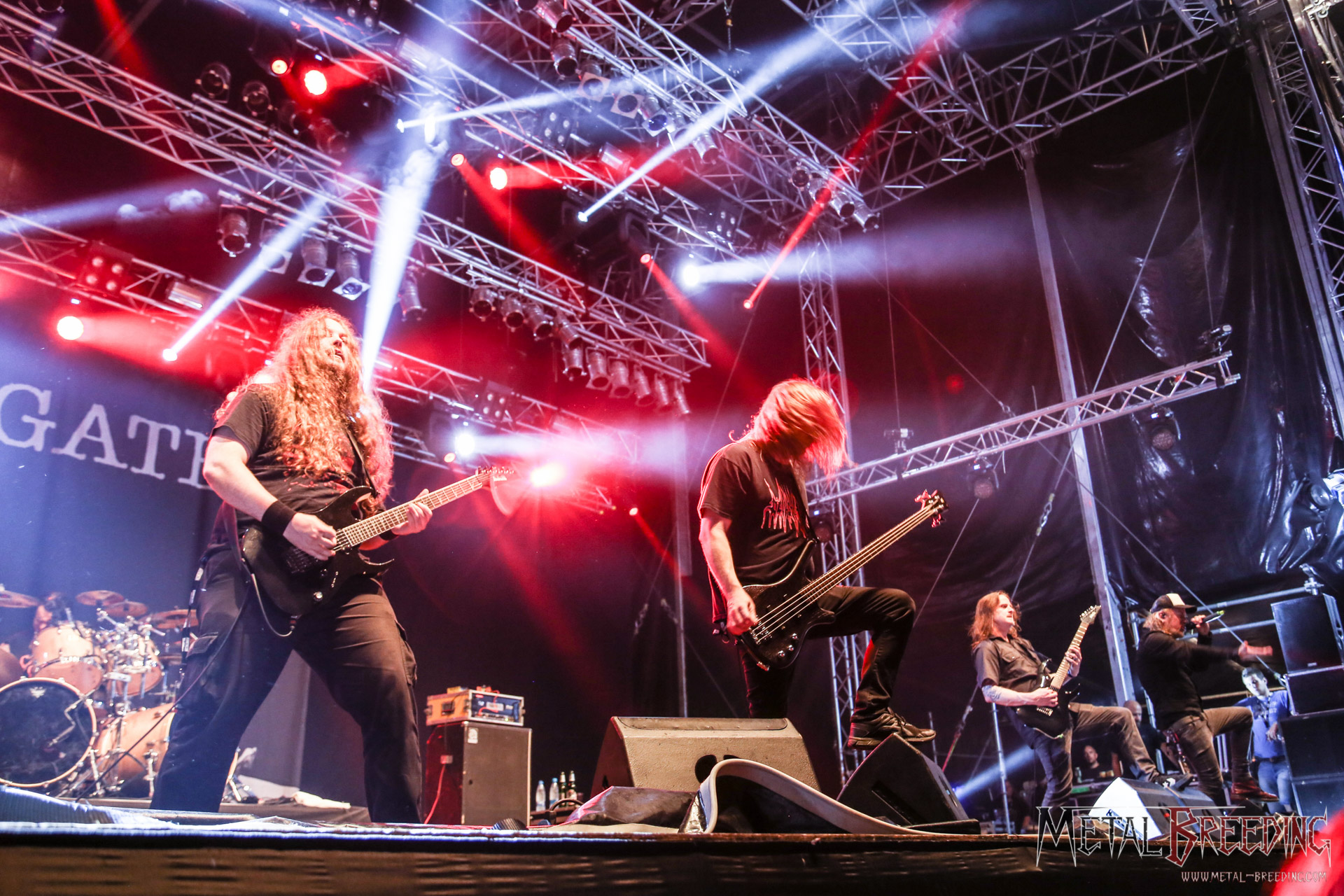 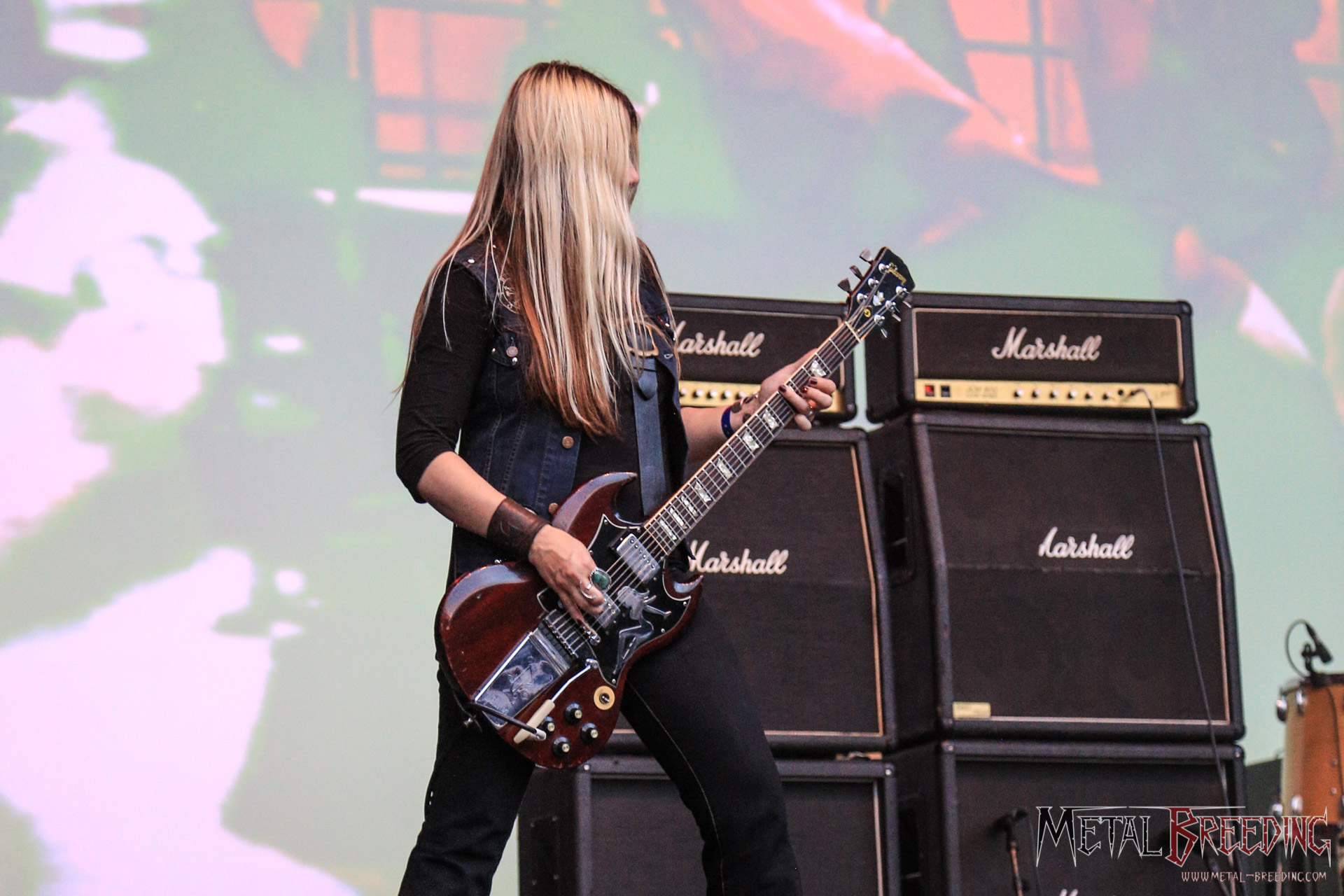